Victoria Price was in London, UK this week giving an inspirational talk on her legendary dad and his legacy. The event, at the BFI Southbank, which followed a screening of the rarely-seen 1960s western The Jackals, also gave her the opportunity to give her seal of approval to the first-ever British-made Vincent Price Ale, which has been especially created by Kent brewers Hopdaemon in honour of the Horror King, and whose label has been designed by the equally legendary Graham Humphreys (aka The Quadfather).

Black Cat, so named because of Vincent’s brush with meddlesome moggies in the film classics Tales of Terror and Tomb of Ligeia, is now available to order online. So if you fancy stocking up the perfect Halloween tipple, then check it out now: www.alesbymail.co.uk

Have you ever wanted to meet Dr Phibes’ beloved Victoria (aka Caroline Munro) in the flesh? What about Theatre of Blood‘s Rosemary (Madeline Smith) or From a Whisper to a Scream‘s Katherine White (Martine Beswick)?

Well these three lovely ladies, who have all been co-stars of Vincent Price, will be appearing at the Film Fair in Camden, London, on Saturday 22 October.

As well being an accomplished actor and an art expert and lecturer, Vincent Price was also passionate about food. As his daughter Victoria says in her lectures on her dad, ‘He loved to eat’.

Along with his second wife, Mary (Victoria’s mum), Vincent published the acclaimed gourmet tome, A Treasury of Great Recipes, in 1965, which brought together recipes collected from the kitchens of 35 American restaurants (including the Four Seasons, Galatoire’s and Locke-Ober) and eight European countries, plus several dozen of the Price’s own unpretentious favourites, including two for hot dogs. This glorious tome got a sumptuous reprint in 2015 by Dover Press.

In 1969, the couple also released their Come Into the Kitchen Cook Book, which was devoted to the heritage of American cuisine, from the early pioneer settlers to the Victorian era. This was reprinted many times, with different covers, as well as in a five-volume series which was retitled A National Treasury of Cookery.

In the six-part 1971 Thames TV series Cooking Price-Wise, Vincent invited viewers to ‘travel round the word using your cooker instead of a jet plane’, and shared his experiences of international cuisine, preparing such delicacies as Moroccan tajine, the American Ice Box Cake and Fish Fillets Noord Zee. These recipes and a host more were published in a paperback that is much sought-after today.

This page is dedicated to Vincent’s favourite recipes and is hosted by Jenny Hammerton, who runs the Silver Screen Suppers website. Just click on the recipe title, where you will be taken to the host page.

All around the world, people love eating and drinking like Vincent Price, here’s a round-up of links to other blog posts that celebrate Vincent’s favourite recipes.

• Greg Swenson, author of the Recipes For Rebels James Dean cookbook wrote a great piece about Vincent’s love of Sardi’s restaurant and his post includes the recipe for Cheese Knots

• Granny Pantries had a go at the Blueberry Muffins A La Posada and suggested adding a little vanilla to the recipe.

• Over at the Vincent Price Mania blog, two recipes were sampled. First, an all-time top favourite in the Silver Screen Suppers Kitchen, Mexican Creamed Corn. Plus one I haven’t tried yet, Old Fashioned Bread Pudding

• Lauren from The Past On a Plate made Blueberry Muffins A La Posada and Ranch Eggs – what a lovely brunch!

• In Canada, Lisa from Brain Meets Keys put together a spectacular brunch, trying out three recipes from the Treasury in one go! Blueberry Muffins a la Posada, Buckingham Eggs and Champignons Marie-Victoire

• Battenburg Belle took the Treasury all the way to France and made Caesar Salad, Sea Bream Biscay Style and Petits Pois a la Francaise

• Taryn from Retro Food for Modern Times made Chicken in Champagne Sauce and Buckingham Eggs as a JAFFLE. 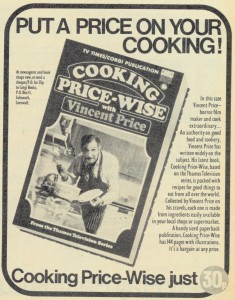 Jenny Hammerton at Silver Screen Suppers celebrates the launch of Vincent Price Ale and the BFI’s screening of the 1960s western The Jackals with a tasty classic from Vincent and Mary’s Price’s Come into the Kitchen Cookbook.

When I heard there was a Vincent Price Ale my first thought was: “what can I cook with it?!” I went directly to The Treasury of Great Recipes, and then Cooking Price-Wise, and then the Come Into the Kitchen Cookbook to see in which of his recipes Vincent used the best of all cooking ingredients – beer!

A conversation with Vic Pratt, Curator of Fiction at the BFI got me to thinking about The Jackals. Have you got your tickets yet? It’s a very rare chance indeed to see this film on the big screen here in London, and what’s more, Vincent’s daughter Victoria will be there presenting a talk about her father after the screening. Here’s a link to the box office – it’s on Tuesday 20th September at the BFI Southbank. I am super excited.

Vic and I had a brainstorm about what Vincent’s character in the film would eat. The film is set in South Africa and Vincent plays a gold prospector. To us Brits, a gold prospector who wears a hat like this:

is effectively a cowboy. So we thought Chilli? Beans? Sausages? I decided that a recipe from the Come Into the Kitchen Cookbook would be most appropriate as it’s a kind of look back into ye olden days of American cooking.

So there in the “Young Republic” section, I found a recipe for Beef Ragout. I think if Oupa Decker or his daughter Wilhemina made this, they would be more likely to call it beef stew. It’s a very solid, meaty, meaty, meaty dish which might not be to modern taste. I can definitely imagine it being scraped up from metal plates with metal spoons around a camp fire with great vigour though…

The Vincent Price Ale has only just been launched at FrightFest and I have a crate on order, so alas, I couldn’t use the “Black Cat” for this particular dish. But if I’d had some, I definitely would have. As soon as my delivery arrives I’ll be trying Vincent’s recipe for Carbonnade of Beef from Cooking Price-Wise. Oh yes!

Until then, here’s the Ragout recipe, with my suggestions for making it a little less “Wild West” and a little more foodie friendly.

Coat the beef cubes in flour; brown in hot oil in a Dutch oven [casserole dish]. Pour in the water, beer, seasonings, carrots, celery, lemon and the onion studded with the cloves. Cover and cook gently 1 and 1/4 hours, stirring occasionally, or until the meat is tender. Remove the onion and stir in catsup. Correct the seasonings. You may add sliced mushrooms, artichoke bottoms boiled and quartered or hard-cooked [hard boiled] egg yolks.

I tried my best to take an appetising photo of the Ragout before I fiddled around with it, I think I failed.

Here’s how I pimped it.

I browned the flour coated beef in a frying pan, then put that and all the other ingredients except the ketchup into my slow cooker and left it to do its thing overnight. The beef was really lovely and tender, but the flavours weren’t very pronounced and there wasn’t much liquid. As I was hoping for more of a stew, when I got home from work, I popped in a tin of tomatoes, a bit of homemade spicy barbecue sauce and lashings of Worcestershire sauce and black pepper to joosh it up. Yum.

As there was just me, myself and I, there are now two big portions of this are in my freezer and I am planning to use one for Lasagna and one for Shepherd’s Pie.

I will report back on the Carbonnade of Beef soon!