As well being an accomplished actor and an art expert and lecturer, Vincent Price was also passionate about food. As his daughter Victoria says in her lectures on her dad, ‘He loved to eat’.

Along with his second wife, Mary (Victoria’s mum), Vincent published the acclaimed gourmet tome, A Treasury of Great Recipes, in 1965, which brought together recipes collected from the kitchens of 35 American restaurants (including the Four Seasons, Galatoire’s and Locke-Ober) and eight European countries, plus several dozen of the Price’s own unpretentious favourites, including two for hot dogs. This glorious tome got a sumptuous reprint in 2015 by Dover Press.

In 1969, the couple also released their Come Into the Kitchen Cook Book, which was devoted to the heritage of American cuisine, from the early pioneer settlers to the Victorian era. This was reprinted many times, with different covers, as well as in a five-volume series which was retitled A National Treasury of Cookery. Last year, Dover Press reprinted it with extra bonus content, including a new Foreward from Victoria Price. 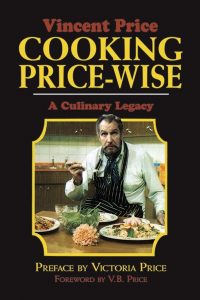 In the six-part 1971 Thames TV series Cooking Price-Wise, Vincent invited viewers to ‘travel round the word using your cooker instead of a jet plane’, and shared his experiences of international cuisine, preparing such delicacies as Moroccan tajine, the American Ice Box Cake and Fish Fillets Noord Zee. These recipes and a host more were published in a paperback that is much sought-after today. An extended edition is being release from Dover on 24 November 2017, and will also be available on Kindle.

This page is dedicated to Vincent’s favourite recipes and is hosted by Jenny Hammerton, who runs the Silver Screen Suppers website. Just click on the recipe title, where you will be taken to the host page.

All around the world, people love eating and drinking like Vincent Price, here’s a round up of links to other blog posts that celebrate Vincent’s favourite recipes.

• An appreciation of Vincent’s food writing by Kimberly Lindbergs – In the Kitchen With Vincent Price http://moviemorlocks.com/2013/10/24/in-the-kitchen-with-vincent-price/ – includes the recipe for Souffle Pudding Pierre.

• Dr Bobb made Pineapple Nut Loaf and Poularde Pavillon (Chicken in Champagne Sauce) even crushing the mushrooms with a rolling pin as directed by Vincent – http://dbkitschen.blogspot.co.uk/2015/10/vincent-price-treasury-cookalong.html

• A Slash and Dine Toast to Vincent Price includes the recipe and photographs of the Dark Mocha Cake made by Nicole and Megan – it looks delicious! http://www.brutalashell.com/2011/05/a-slash-dine-toast-to-vincent-price/

• Greg Swenson, author of the Recipes For Rebels James Dean cookbook wrote a great piece about Vincent’s love of Sardi’s restaurant and his post includes the recipe for Cheese Knots – http://www.recipes4rebels.com/?page_id=1031

• Granny Pantries had a go at the Blueberry Muffins A La Postada and suggested adding a little vanilla to the recipe – http://granniepantries.blogspot.co.uk/2015/10/cooking-with-vincent-price.html

• Over at the Vincent Price Mania blog, two recipes were sampled.  First, an all time top favourite in the Silver Screen Suppers Kitchen, Mexican Creamed Corn – https://vincentpricemania.wordpress.com/2015/10/29/the-treasury-cookalong-vincent-prices-mexican-creamed-corn/  Plus one I haven’t tried yet, Old Fashioned Bread Pudding – https://vincentpricemania.wordpress.com/2015/11/05/mary-and-vincent-prices-old-fashioned-bread-pudding/

• The lovely Annie at Kitchen Counter Culture turned to her battered and much loved Treasury for the Gateau Grand Marnier recipe – https://kitchencounterculture121.wordpress.com/2015/11/06/gat/

• Lauren from The Past On a Plate made Blueberry Muffins A La Postada and Ranch Eggs – what a lovely brunch!  http://www.thepastonaplate.com/2015/11/brunch-with-vincent-price.html

• In Canada, Lisa from Brain Meets Keys put together a spectacular brunch, trying out three recipes from the Treasury in one go! Blueberry Muffins a la Posada, Buckingham Eggs and Champignons Marie-Victoire – http://www.brainmeetskeys.com/2015/11/vincent-pricetreasury-of-recipes50th.html

• Battenburg Belle took the Treasury all the way to France and made Caesar Salad, Sea Bream Biscay Style and Petits Pois a la Francaise – http://www.battenburgbelle.com/another-day-another-cookalong/