Produced on the back of the expected success of 1953’s House of Wax, The Mad Magician returned Vincent Price to the world of three-dimensional horror for a third time (Dangerous Mission was released in March 1954, with The Mad Magician following in May).

Here he plays Don Gallico, a creator of illusions for stage magicians, including the Great Rinaldi (John Emery). But his opening night is thwarted by his boss, Ormond (Donald Randolph), who has already stolen Gallico’s wife (Eva Gabor) and now wants his latest invention – the buzz saw. In a moment of madness, Gallico decapitates his employer.

To cover up the crime and the ones that follow, Gallico dons a series of elaborate disguises, but he hasn’t counted on his assistant Karen (Mary Murphy), her detective boyfriend Alan (Patrick O’Neal) and mystery writer Alice (Lenita Lane) from getting in his way…

Originally released on Blu-ray in the US by Twilight, The Mad Magician gets its UK premiere Blu-ray from Indicator with a Limited Edition (3,000) release featuring the following special features…

READ MORE ABOUT THE FILM HERE

‘You’ll need someone to hang onto when you come face to face with the blood-chilling terrors in the tower!’

In this tale of murder, ghosts and guilt directed by Roger Corman for Admiral Pictures, 1960s cinemagoers were dared to spend 83-minutes (actually 79-minutes) in the Tower of London – a monument to the corruption of the soul – according to the film’s narrator (Paul Frees).

It is the year 1483 and the body count begins following the death of Edward IV as Vincent Price’s Richard murders his way to the throne of England, killing his brother Clarence, his political rivals, his nephews and even his beloved wife Anne.

Tortured by guilt, the ghosts of his victims return to haunt the newly crowned monarch, and ultimately lead him to his death on a muddy field at the Battle of Boswell from the sharp end of a double-edged battle-axe.

Produced by Roger Corman’s brother, Gene, Tower of London was an attempt by Admiral Pictures to cash in on the success of American International Pictures successful Poe pictures, but was ultimately let down by its cut-price production values. But the one thing it has got going for it is Vincent Price.

Being the go-to guy for gothic horror in the early 1960s, only Vincent could take on this twisted sibling to the macabre Poe-universe, which made him the King of Horror following his genuinely menacing turns in The Fall of the House of Usher and Pit and the Pendulum, and his multiple roles in Tales of Terror.

Plagued by Hamlet’s ghosts and cursed to die like Macbeth, Vincent Price’s take on Richard III – based on ‘a screenplay by Leo Gordon from stories by Poe and Shakespeare’(*) – is like no other – and nor should it be. It’s a virtuoso one-man show in which he goes from quietly ominous to all out ham hysterics – the kind of which would enshrine Vincent’s unique style forever more.

While its not his best work – Price himself admitted he could have done more with the character– his trademark arched eyebrows, wild-eyes and lip curling leers are certainly worth the price of admission, while the occasional flashes of subtlety serve to remind us that Vincent was also capable of truly great performances when reigned in. This would be most evident in 1968’s Witchfinder General, but also in Roger Corman’s HP Lovecraft horror The Haunted Palace.

Vincent’s Richard is not purely evil, unlike his satanic Prince Prospero in Masque of the Red Death. Instead, he presents Richard as a man whose guilty conscience drives him to madness. Before the histrionics begin, Vincent does inspire genuine sympathy for his character in a couple of genuinely poignant scenes: one in which the ghosts of the little princes try to lure him into committing suicide, and when Richard’s mother, the Queen, shows her hatred for her son’s physical deformities (a hump and a limp hand).

Of course, when Vincent turns on the ham, you can’t help but be reminded of his horror film opus, Theatre of Blood, in which he played the vengeful Shakespearean actor Edward Lionheart. Venting in the same ‘voice beautiful’ that Lionheart was accused of by his critics in the black comedy horror, Vincent becomes Lionheart personified. It’s quite a hoot.

Arrow’s High Definition Blu-ray (1080p) and Standard Definition DVD presentation of Tower of London has been transferred from original film elements by MGM, and includes the original 1.0 mono audio (uncompressed on the Blu-ray) and optional English subtitles. This is a super transfer and a must-have in your Vincent Price library, although the cover art really isn’t to my taste. There’s also a collector’s booklet with an article by John Upton (but this was not included with my screener).

Included in the disc are two archive interviews with Roger and Gene Corman, who spill the beans on the problems behind making the picture, as well as a splendid slideshow featuring behind-the-scenes photos (that I have never seen before) from the collection of Brett Cameron, which plays alongside Michael Anderson’s rousing theme tune.

The other bonus is an audio commentary from Hollywood historian David Del Valle in which he describes Vincent’s Richard as ‘a Todd Slaughter performance’, which he ‘dials up to 12’ in the ‘Plantagenet fun house’ haunting scene, and gives a ‘150-watt leer’ in the battle scene. It’s all great fun to listen to. Del Valle also sets the record straight about Vincent’s acting prowess: that for all the camp barnstorming, he was indeed an actor of wide range, which culminated in his one-man show Diversions & Delights. Nice one, David.

The film’s supporting actors also get the Del Valle once over, including Richard Hale, who appeared in The Incredible Docktor Markesan episode of TV’s Thriller and the chap playing the Duke of Clarence (Charles Macaulay), was Dracula in Blacula.

Tara Gordon, the daughter of the film’s screenwriter Leo Gordon, also features in the commentary. Her father’s amazingly varied career could have made a feature-length commentary by itself, and though I would have like to know more, we do get to hear from her about her dad’s association with Roger Corman and his co-writer Amos Powell, who shot himself, while her story about her dad’s fart machine is hilarious. 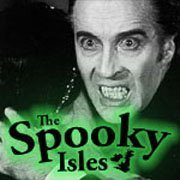