Back in October 2012, Little Shoppe of Horrors editor Richard Klemensen dedicated Issue 29 to tell the ‘definitive history’ of director Robert Fuest’s cult classic The Abominable Dr Phibes, starring Vincent Price in one of his most iconic movie roles. It was a revelation, featuring Phibesologist Justin Humphreys’ phan-tastic feature, The Kind of Fiend Who Wins, which was packed with detailed information about the making of the film, from its story genesis to its hugely successful cinema release.

This beautifully-designed issue also included Humphreys’ essay on the film’s art director Brian Eatwell, alongside David Taylor and Sam Irvin’s well-researched feature The Unphilmed Phibes, which exhumed all the lost Phibes movies, and Bruce Hallenbeck’s informative article on the making of the sequel, Dr Phibes Rises Again, and contributions from cult film writers Denis Meikle, David Del Valle, Derek Botello, and many more. Plus, it had special introductions from Tim Burton and Frank Darabont.

I so love this issue and have returned to it countless times – especially for the many behind-the-scenes photos and artwork, as well as the interesting sidebar features that included the hunt for Phibes’ Rolls Royce, a review of the original LP Soundtrack, as well as tributes to the two actresses who played Vulnavia, Virginia North and Valli Kemp.

Fast-forward to 2018 and Humphreys, who works as a film historian at the Academy Museum of Motion Pictures, has revived his original essay for this new paperback book from Bear Manor Media. Now the big question for anyone who already has the LSoH celebration issue is – ‘Is it worth getting?’

On the plus side, and it’s a big plus, you get expanded versions of Humphreys’ The Kind of Fiend Who Wins and the Taylor/Irvin contribution, The Unphilmed Phibes, both of which include extra bits added from interviews with screenwriters William Goldstein and James Whiton, sound designer Peter Lennard, actress Fiona Lewis, and many others.

Humphreys has also written an informative essay on the making of Dr Phibes Rises Again, using interviews from a variety of sources, which can be found in the extensive bibliography in the front of the book. Plus, there’s two short pieces by Phibes enthusiast Mark Ferelli, including one about his amazing magic lantern show which I was lucky to have seen at London’s Horse Hospital back in 2005.

On the negative side, the book lacks the stunning design of LSoH, with a number of blank pages that could have easily been filled with more photos or some of the previously published sidebar features, as well as a couple of typo errors. A big selling point for me was the opportunity to see never-before-seen production artwork by Fuest from his personal shooting script as well as previously unpublished behind-the-scenes photographs. Well, there are only three scans of the shooting script (I would have like to have seen more), but there are some rare images not published before on offer, including James Whiton’s photos from the world premiere.

But aside from those couple of niggles what shines through is Humphreys’ incredible passion for the Phibes films and his admiration for Bob Fuest, whom he befriended while conducting his research. It’s what makes this book a phan-tastic companion to the LSoH celebration issue. Oh, and its thanks to reading this book that I have now tracked down a copy of the Great Organ Works LP, which not only contains Nicolas Kynaston’s rendition of War March of the Priests, but also his Toccata and Fugue in D Minor, which opened Amicus’ 1972 anthology Tales from the Crypt. Win win! I say! 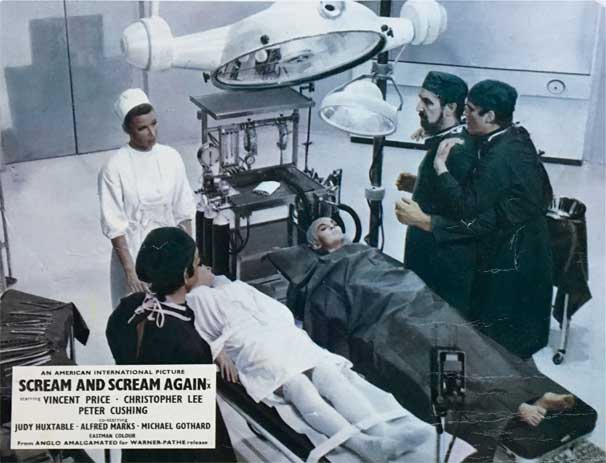