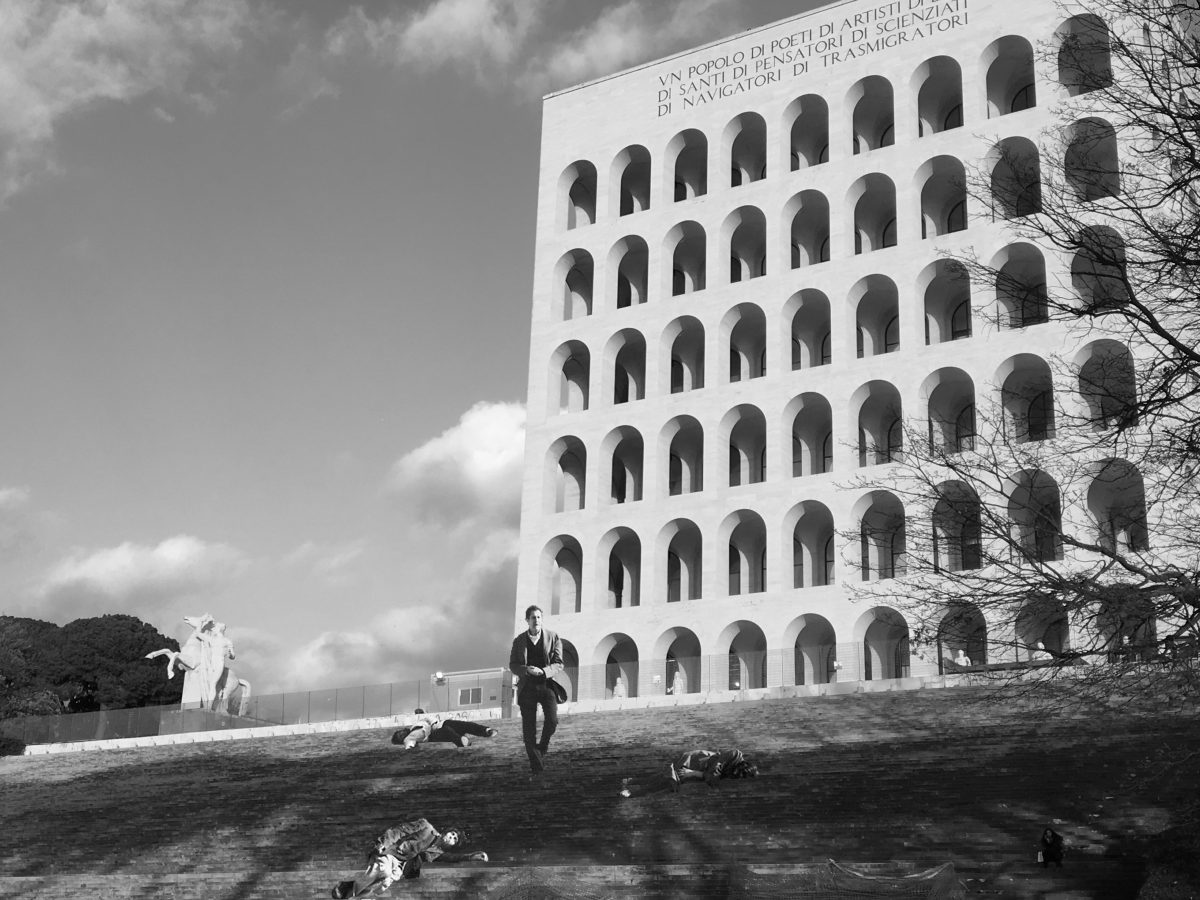 In the winter of 1961-1962, Vincent Price starred in the first cinematic adaptation of Richard Matheson’s novel I Am Legend, re-titled The Last Man on Earth. Although ostensibly set in Los Angeles, the film was actually shot in Rome, Italy, making effective, atmospheric use of the Immortal City’s unique business and residential district, EUR.

This area was originally conceived as the Esposizione Universale Roma, Benito Mussolini’s grand plan to celebrate 20 years of fascism for the 1942 World’s Fair. But it remained unfinished due to the Second World War, and was finally completed in time for the 1960 Olympics in Rome.

The austere new buildings that rose up became symbols of a new wave of Italian rationalism inspired by ancient Roman Imperial town planning; with the most iconic being Marcello Piacentini’s travertine-marble clad Palazzo della Civiltà Italiana (or Square Colosseum). Today it’s the HQ for the Fendi fashion label, and has featured in quite a few films, but The Last Man on Earth was the first to use the location, followed by Federico Fellini’s Boccaccio 70 segment Le tentazioni del dottor Antonio in 1962.

On a recent visit to Rome, I decided to start tracking down the original locations used in the film, and I was surprised to find quite of few. Some, however, remain elusive owing to the passage of time. But here are the ones I have found – so far.

The film begins with the sun rising over an unidentified suburb in Rome, with vista shots of the Tiber, deserted streets littered with corpses, tower blocks and a freeway overpass (to link it to LA obviously), a petrol station, supermarket and a Community Church displaying a sign The End Has Come.

This is Santi Pietro e Paolo a Via Ostiense in Piazzale dei Santi Pietro e Paolo 8 in EUR, which was completed in 1955 and was intended to be Mussolini’s mausoleum, but is now where Cardinal Priests are appointed. In my Now shot, my travel companions were quite willing to play ‘dead’ while the odd churchgoer passed by.

The camera then pans on a bungalow where Price’s eponymous Last Man, Robert Morgan resides. Now,  I’m unsure whether this was a set or not, but scenes of Morgan driving towards the entrance reveals an incline and a wood or forest in the distance, so the jury is out on that one.

While heading to dispose of his latest ‘victims’, Morgan passes Santi Pietro e Paolo a Via Ostiense and a couple of tower blocks, and ends up on the outskirts of Rome where the burning plague pit is situated.

After picking up some chilled garlic at a modern (1950s style) supermarket, Morgan tracks stakes some more sleeping vampires. A montage reveals a new housing development, an amusement park (most probably the same one that appears in 1966’s Dr Goldfoot and the Girl Bombs) and a large sporting arena.

This Then/Now shot shows the Palazzo Dello Sport, which was completed in 1960 for the Summer Olympics in Rome, and is today known as PalaLottomatica, the home of the Vitus Roma basketball team.

Morgan then falls asleep while visiting his wife’s mausoleum, a modernist building at a cemetery under construction, where he finds himself fighting off a band of vampires. This another location I have yet to find.

Flashbacks reveal Morgan’s family life (which takes place in a villa with a terraced garden) and his work at the Mercer Institute of Chemical Research (an unidentified 1930s office building lined with columns), while army trucks drive through EUR’s wide streets.

Back in the present, Morgan gives chase to a black dog, heading down the street from his home, over a verge (where the same two columns we see at the beginning of the film can be seen), and onto the steps of the Palazzo della Civiltà Italiana.

At the four corners of the podium of the iconic Square Colosseum are placed four equestrian sculptural groups by Publio Morbiducci and Alberto de Felci, representing the Dioscuri, the two mythical Greek heroes, sons of Zeus and Leda. Other films shot here include Peter Greenaway’s Belly of an Architect (1987), Hudson Hawke (1991) and Titus (1999) with Anthony Hopkins.

Morgan then runs across a road flanked by a colonnade. This can be found beside the Santi Pietro e Paolo a Via Ostiense.

The next sequence features another iconic EUR structure, Il Fungo, which is situated on a hill across the road from the Palazzo Dello Sport.

This Piezometric water tower was completed in 1960 and continues to supply water to the EUR gardens today. In 1961, tenor Mario del Monaco turned the top of the tower into an exclusive restaurant (although it probably wasn’t open at the crack of dawn when Price filmed his scene). Il Fungo was also used in the opening scenes of Michelangelo Antonioni’s L’Eclisse in 1962.

Following shots of a street featuring a statue similar to the ones adorning the Square Colosseum, Morgan finds three vampires staked at a clearing. This is a hill bearing two rows of trees and some white building in the distance. Here, Morgan encounters Ruth who proves his undoing.

In the final eight minutes, Morgan tries to evade capture by the new order of human/vampire hybrids by taking refuge in a unidentified building before being cornered and killed on the altar of a church.

The film’s climax takes place at the modernist-designed St Pius X Catholic Church via Attlilio Friggeri 87 in Trionfale, Balduina, which was built in 1961. Apart from some recent modernisation, and the installation of the pipe organ (in 1969), the interior has hardly nchanged.

I’m currently putting together a video of my film location finds, but until that’s completed, I shall leave you with one last montage.