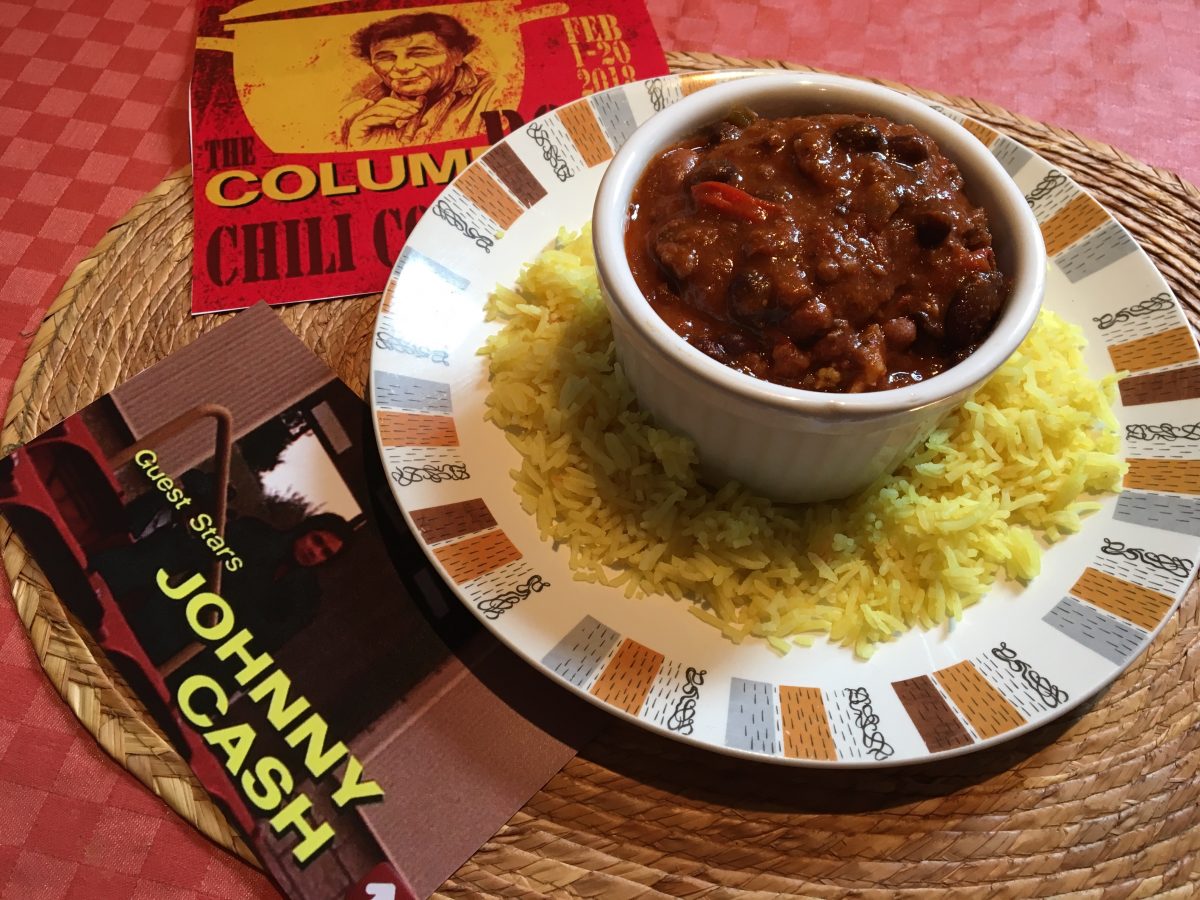 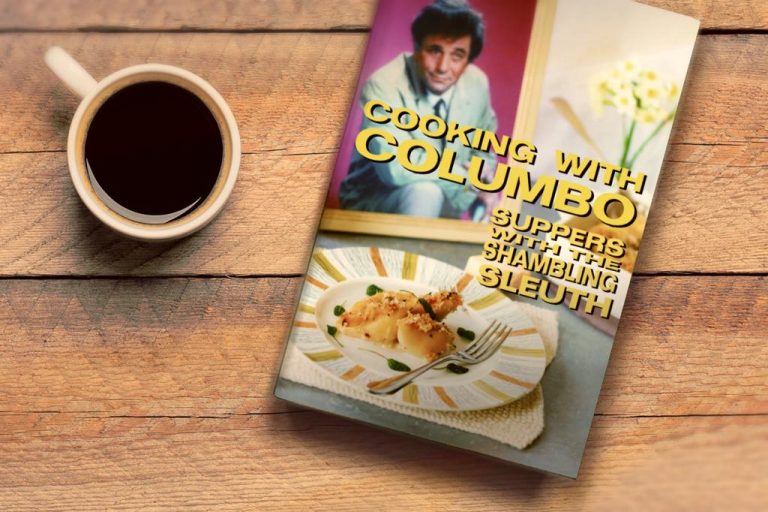 20 February marks the 50th anniversary of Prescription Murder – the first pilot episode of Columbo, the US murder mystery series starring Peter Falk as the raincoat-wearing sleuth that ended up running for 10 seasons until 2004. And what better way to celebrate than with the launch of a fantastic new culinary tome from Silver Screen Suppers’ Jenny Hammerton, the author of the Cooking with Joan Crawford Cookbook.

Cooking with Columbo: Suppers with the Shambling Sleuth is a treasury of 100 recipes, collected from Peter and his many co-stars, served up episode by episode alongside a selection of tasty side dishes and kitchen tested tips. 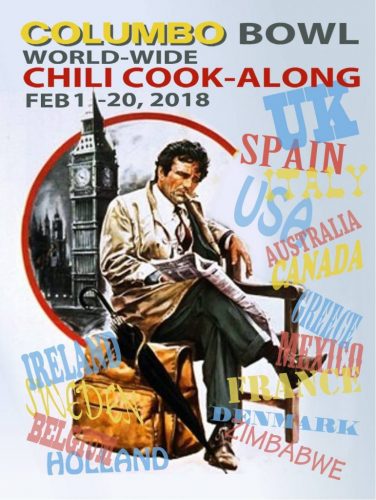 To accompany the book’s release, Jenny has been hosting the Columbo Bowl Chili Cook-Along (which ends on 20 February and everyone is invited to join in so check it out here), in which foodie fans are whipping up a chili dish based on a recipe by country and western star Johnny Cash (he was the guest in the 1974 episode Swan Song). 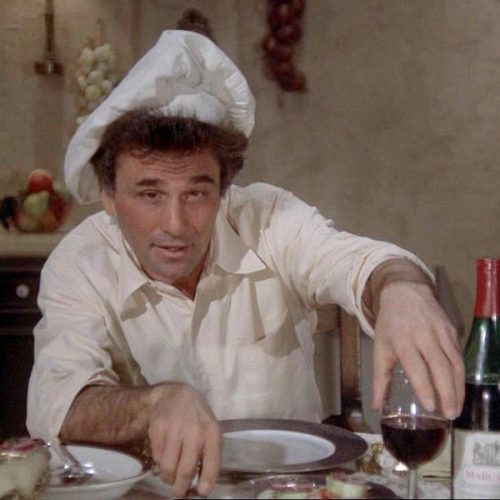 Chili was a big favourite of Columbo’s; although he got quite the surprise when Johnny’s version in the episode turned out to be made from squirrel meat. Thankfully Jenny asked everyone to either use beef (or try out the vegetarian version) for the cook-along. I opted for the former and you can see the results that I made live for the cook-along in the video below. Plus, I’ve included the recipe at the bottom on this post.

So what’s the Vincent Price link? Well, not only was Vinnie a big foodie himself (and the author of a number of cookbooks), he was also one of the many guest stars and appeared in Lovely But Lethal alongside Vera Miles, whose recipe appears in the book. Jenny has kindly provided that extract and I’ll be doing a post real soon.

In the meantime, here’s Johnny’s Chili recipe – and as it calls for beer as one of the ingredients, I have of course used a bottle of Hopdaemon’s Vincent Price Ale: Black Cat. 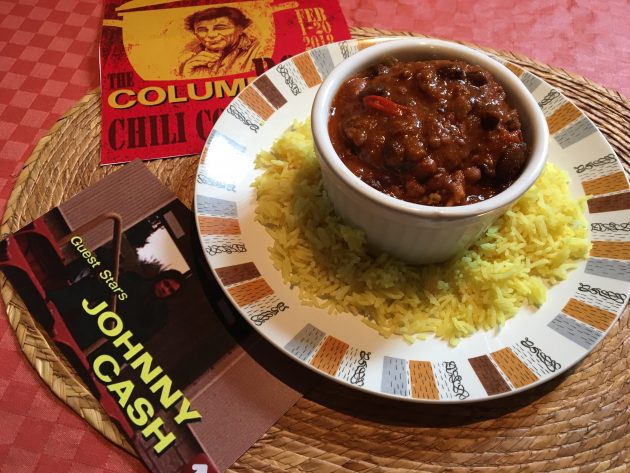 With the oil remaining in the pot, brown half the onions and garlic over medium heat until they are caramelized. Now add the well-drained ground beef and steak. Stir and heat it all up. Add the cans of tomatoes, the bell peppers, hot peppers (if using), and the remainder of the onions and garlic. Heat to a brisk simmer, stirring often.

John Carter Cash says that his dad would normally add the spices in the following order, first the chili packet, followed by some salt and black pepper, chili powder, cumin, sage, oregano, and cayenne pepper. John advises tasting the chili and once the spicing it is to your liking, drain the cans of beans and add to the mixture. Now taste again, as the beans mellow the flavor of the chili. Once the chili is to your taste, pour in the bottle of beer. Stir well. Cover and simmer for at least 30 minutes, stirring occasionally. Add sugar to your taste. Simmer, covered, for at least another 30 minutes, making sure to stir so the chili does not burn. Now add the cornmeal and stir in.

* If self-rising cornmeal is unavailable, you can make it yourself. Just combine 1 cup / 120g of cornmeal, 1/3 cup / 40g all-purpose/plain flour, 1 & 1/2 teaspoons of baking powder, and 1/2 teaspoon of salt. Put the leftover mix in a sealed container and save for your next batch of Johnny Cash chili.
Serves 6